Recently, we were asked by VRT to shed our light on Instagram’s plans to purge fake followers from its platform. Given the amount of money that’s involved in influencer marketing, north of 1,7 billion dollars in the US alone, and the number of brands working with influencers, this culling doesn’t come a moment too soon.

It’s one thing to buy followers to artificially inflate your importance on social media, it’s quite another thing to mislead brands who pay you to ‘influence’.

Obviously, an algorithmic change won’t automagically remove all ‘inauthentic content’ from the Internet or suddenly make influencers behave; so that’s why we compiled a list that can help you spot so-called nonfluencers or fauxfluencers on the Gram (and beyond) so you don’t spend your money on the wrong people.

☝️ Want to work with influencers, but don’t want wade through this article? Drop us a line and we’ll do it for you!

1. Follower count: who has this many friends ??

A first culprit that could indicate an influencer is bamboozling you is the amount of followers. A generic, local influencer who never received any media attention or isn’t active in a specific niche but still managed to get tens of thousands followers should set off some alarm bells and definitely warrants further inspection.

This number is obviously relative and is highly dependant on the area and region the influencer is influential in, but just remember that on Instagram you don’t just get thousands of followers overnight unless you do something crazy or slept with someone famous.

Luckily, there are tools that can give you more comprehensive statistics about influencers including the amount of followers they have gained over a specific period of time. So if you notice a large increase or drop in followers here, don’t hesitate to slide into the influencer’s DM to ask him how he got or lost all these new friends!

A quick glance at the followers of your favorite influencer will quickly reveal the sort of profiles they’re followed by. While not every profile with a foreign or weird sounding name is automatically suspicious, it’s safe to assume that profiles with a nonsensical name, no profile picture and no posts whatsoever are most likely fake.

However, a lot of these fake accounts are quite elaborately crafted and look genuine at first sight. It’s only when you dig deeper that you realize that the profile picture and posts are either stock photos or stolen from someone else. Creepy huh? 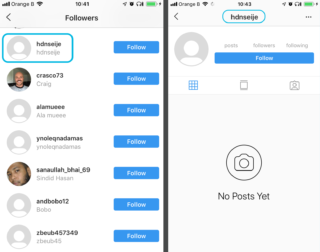 You can’t really control who follows you if you have a public profile, so it’s certainly possible that an influencer is unwittingly being followed by a fake, deleted or bot accounts. But when you see hundreds or thousands of these accounts, it might not be a bad idea to have a chat with Mr or Mrs. Influencer.

This is a trickier one since there’s no objective way to determine how many likes a post of an influencer should receive in relation to its follower count (also called engagement rate). A general rule of thumb is: the higher the follower count, the lower the relative amount of likes.

This is because of the way the algorithm works; not only does this algorithm determines the type of content you see, it also makes sure the content is somewhat evenly spread among the accounts it determines to be interesting for you.

Still with us? What’s important to remember is that while Instagram will never reveal the inner workings of its algorithm, it’s generally accepted that genuine influencers have an engagement rate (likes/followers*100) of around 3 – 5%.

Or put differently: an influencer with 150.000 followers and only 500 likes per post on average is probably a fraud.

Note that there tools that can both benchmark this ratio and detect spikes in likes. They can use algorithms and bots, but so can we ?!

The danger in these articles, and analyzing social media in general, is that it can quickly turn into a numbers game. That’s why it’s important to also look at the context.

A quick way to gauge the quality of the engagement an influencer generates is looking at the comments under their posts. Naturally, there isn’t an objective way to judge the quality here, but there are definitely some words and combinations that are a dead giveway. 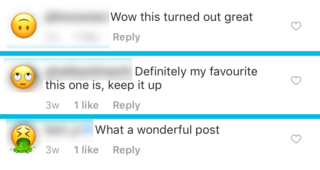 We’re not saying every comment should be a deconstruction of Nietzsche’s Also sprach Zarathustra, but something a bit more creative than “Wow nice post”, isn’t too much to ask right?

You might wonder why an influencer would want these types of comments under their posts, but unfortunately the algorithm rewards posts with lots of likes and comments which makes buying followers and comments really tempting for a lot of influencers. Especially when you can buy both with just a few clicks.

And since there’s no way around the algorithm, influencers have started to resort to desperate measures like ‘Instagram Pods’ which are group chats where influencers can ask for likes and real comments on each other’s posts. Cute when these pods only counts ten members, but downright fraudulent when tens of thousands of people are involved.

Why should you pay someone to promote your brand to people who don’t really care or even exist?

Every community and generation has its own language and slang, so not every weird word or sentence should be interpreted as a sign of ‘inauthentic activity’, but having your social media agency vet the influencers you want to work with, can save you a lot of trouble and money down the road.

5. Authenticity: do you really mean what you just posted ??

Yeah, no algorithm or tool is gonna help you with this one.

No one is better suited to understand what your brand stands for than you, but determining which influencers, who often communicate and engage with their respective communities in their own way, are the right fit, is a bit more difficult to simply do on your own.

The biggest challenge brands working with influencers are facing, is how they can get their brand message across without hampering the influencers’ authenticity and creative freedom. Conversely, it can be equally challenging to create influencer campaigns that also fit your brand image.

But fact remains: if you want someone in your campaign to just parrot your briefing to the letter, you’re better off simply buying ad space. No, the reason you want to work with influencers is because they bring something complementary to the table. Or put differently by influencer marketing guru Coltrane Curtis:

“It’s impossible to work with cultural influencers without giving back to the culture that created them. Influencer marketing is not about knowing who the right people are, it’s about actually knowing those people. Otherwise, brands are simply engaging in a more complicated pay-to-play advertising model that garners cloudy ROI, at best.“

We’ve done campaigns for clients where influencers really brought the campaign to another level, but we’ve also done a few without them because they simply didn’t fit the campaign or brand at that time. 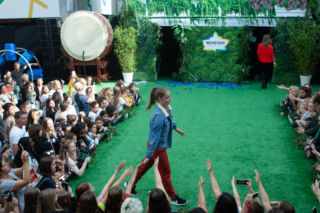 TikTok-influencer Steffi Mercie and her fans having a good time during our campaign for Wijnegem – Shop Eat Enjoy.

There’s no secret formula that can be applied instantly and fixes every challenge. Luckily we have developed a method that both clients and influencers feel comfortable with and that has produced some nice campaigns.

So if you’re doing influencer marketing or just looking for ways to get more out of it, we suggest you sending us an email or giving us a call to see what we can do for each other.

If you couldn’t care less and hate influencers, we also recommend sending us a mail or giving us a call to vent your frustations and listen to how we might be able to help you anyway.